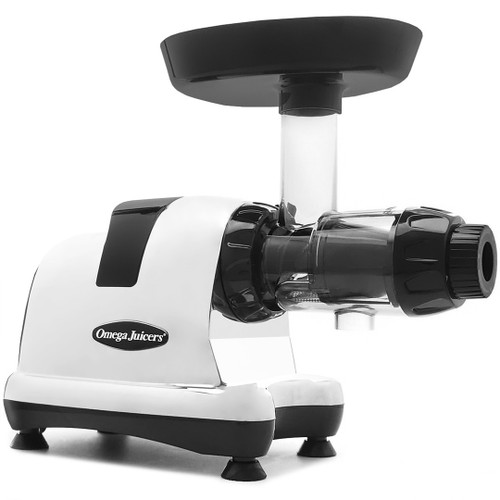 The Omega 8008 is the latest member of the 8000 series family and it has been released as a direct upgrade to the highly popular 8006. As expected, it maintains all the perks of its predecessor and improves on it where possible. As a result the 8008 now benefits from a pressure adjusting nozzle and an inbuilt scoop handle while still providing the same excellent performance, build quality and versatility we’ve grown used to. For those novice users, this is a slow cold pressed masticating juicer that has been designed to slowly process the produce and extract maximum yield.  The slow rotation of the parts prevents heat created within the juice, thereby avoiding oxidation which further preserves the freshness of the juice.

A big advantage for the 8008 comes in the form of well built juicing parts. Many of the parts have been redesigned slightly over the 8006 and are produced from higher quality plastics such as Tritan and GE Ultem, making them even more durable under the pressure of juicing.

As with a majority of horizontal style juicers, the 8008 is capable of more than just juicing thanks to the inclusion of a homogenising blank and 5 different nozzles. The blank is used in place of the usual juicing screen and allows the 8007 to act as a food mixer, mincer and grinder. When combined with the variety of nozzles available this allows for the production of many foods including sorbets, nut butters, pasta, ground coffee and even minced meat.

As would be expected, the 8008 produces a great juice yield thanks to its well developed juicing mechanism and parts. However, it also benefits from 5 variable pressure levels that can be set through a nozzle on the end cap. These levels allow produce to be put under more pressure as it is juiced, ensuring that optimal yields are extracted from different ingredient types.

A low pressure is ideal for use with softer ingredients and a high pressure is useful to get the most out of really tough ingredients such as leafy greens like kale, spinach etc.

Please be aware, that the 8008 is sold in Europe under a different model name. The 8228 European model is identical to the 8008, but it is built to be compatible with a 220 volt power supply. Other than this, no changes have been made to the motor or parts.