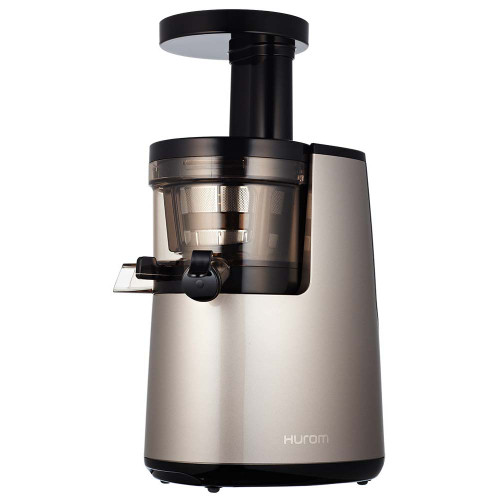 We are sad to say that the HH 11 has been discontinued and is now no longer available to purchase. However, it has instead been replaced by the Hurom H-AA 3rd Generation Slow Juicer. The H-AA acts as a direct replacement to the HH11 and provides a wide array of improvements to make juicing even more efficient than ever before. As Hurom's Official UK Distributor we are proud to say that the H-AA is a worthy model to continue the Hurom legacy.

The Hurom HH 11 is an exceptional juicer that provides some great improvements over the previous HU700 Hurom Slow Juicer. Hurom's 40 years of experience is well showcased in this device, and it boasts a wide range of features to set it apart from many other juicers on the market. In terms of juicing it’s among the best and is equipped with a 43 RPM motor and Hurom’s Slow Squeezing Technology, which allows it to produce smooth and delicious juice on-demand.

Unlike other juicers on the market, the Hurom HH 11 is able to produce a wide variety of juices with many different textures. This is due to the fine and course juicing screens, which remove different levels of pulp from the juice. The fine screen produces a thin and pure juice, while the coarse screen will produce a thicker juice that resembles a smoothie.

The HH 11 also allows further modification through the newly included pulp discharge control lever. Having the lever in a closed position causes more pulp to remain in the juicing chamber, which in turn makes the juice thicker. Having it open allows for easy pulp ejection keeping the juice clear and pulp free.

Hurom are known for their innovative juicing technology, which stems from over 40 years in the appliance industry. In their latest juicer models, they use their patented Slow Squeezing Technology, which works to extract even higher levels of enzymes, nutrients and vitamins from ingredients. The SST™ can achieve this thanks to the incredibly slow 43 RPM motor found in the HH 11. The slower motor allows for the juicer to remain cooler while it is in use, helping to reduce the effects of oxidation on ingredients as they are processed.

The slow operating speeds also facilitate better juice yields since the augur and screen are given more contact time with ingredients. As a result the HH 11 is one of the best around when it comes to juicing high juice ingredients such as soft fruits. Furthermore, the dual wing augur allows the HH 11 to juice ingredients just as fast as other vertical models, preventing the risk of juicing becoming a time consuming task.

The HH 11 is a big step up from its predecessor the HU700 and the improvements seen during juicing are the result of smart changes made by Hurom to the design of the juicing components. The juicing chamber on the HH 11 now features a pulp lever, which allows for easy control over pulp discharge rates, allowing different people to produce a juice customised to their tastes. The HH 11 is also equipped with a new and improved spinning brush. The new brush has 4 blades on it instead of 2, making it much more effective at mixing ingredients as they are juiced.

On top of that Hurom have also reinvented how their juicing technology works. Having moved away from the previous cog mechanism the spinning brush is now moved by the augur. The dual winged design of the augur not only allows it to juice at double the rate of a single wing augur, but it also allows the augur to clip into the top of the spinning brush to move it at the same slow 43 RPM pace.

Hurom prides itself on low-maintenance juicers, and the HH 11 is a fantastic example of a juicer that is easy to clean. Following juicing, it is easy to cut rinsing times down by pouring a little warm water into the juicing chamber and turning the HH 11 on. After the juicing components have soaked in the water for a minute, it can be poured out and the parts disassembled. Carrying out this process allows the water to flush out any residue of juice and pulp, making it less hassle to keep parts clean.

The HH 11 also benefits from the new augur and juicing chamber designs, which reduce the levels of pulp within the juicer, making disassembly and effortless process. Re-assembly is also easy due to the guidance marks included on both the bowl and the screen.

The Hurom HH 11 Slow Juicer is a great device, suited to a range of requirements. Its brilliant 43 RPM motor allows it to produce fresh and tasty juice beyond the levels seen in past juicers, and its SST™ ensures that optimal levels of nutrients are extracted from all ingredients. The host of new juicing components really help the HH 11 to leap over its predecessor and it can't be disputed that this device is among the best vertical juicers in the world.